We have some of the biochemical answers, but we can look deeper into biophysics. The DNA functions in a way that correlates with holographic projection.

DNA projects a blueprint for the organism that is translated from the electrodynamic to the molecular level. Furthermore, research strongly suggests DNA functions as a biocomputer.

This DNA-wave biocomputer reads and writes genetic code and forms holographic pre-images of biostructures. We are more fundamentally electromagnetic rather than chemical beings .

How did this new theory take shape?

How is a third nucleotide in an encoding triplet selected

To understand, what kind of mechanism resolves this typically linguistic problem of removing homonym indefiniteness, it is necessary firstly to postulate a mechanism for the context-wave orientations of ribosomes in order to resolve the problem of a precise selection of amino acid during protein synthesis [Maslow, Gariaev 1994].

This requires that some general informational intermediator function with a very small capacity, within the process of convolution versus development of sign regulative patterns of the genome-biocomputer endogenous physical fields.

It lead to the conceptualization of the genome’s associative-holographic memory and its quantum nonlocality.

These assumptions produce a chromosome apparatus and fast wave genetic information channels connecting the chromosomes of the separate cells of an organism into a holistic continuum, working as the biocomputer.

Where one of the field types produced by the chromosomes, are their radiations.

Laser radiations from chromosomes and DNA

This postulated capability of such “laser radiations” from chromosomes and DNA Laser radiation from DNA and chromosomes has already been demonstrated experimentally in Moscow, by the Gariaev Group.

DNA as a wave biocomputer and nature

Thus it seems the accepted notions about the genetic code must change fundamentally, and in doing so it will be not only be possible to create and understand DNA as a wave biocomputer, but to gain from nature a more fundamental understanding of what information [Marcer in press] really is!

Experiments in Moscow and Toronto extend understanding of genomic information

For the Gariaev Group’s experiments in Moscow and Toronto say that the current understanding of genomic information i.e. the genetic code, is only half the story [Marcer this volume].

Research conducted at the Institute of physical and technical problems of the USSR (Институт физических проблем имени П. Л. Капицы РАН, eng.), then at MSU, FIAN, in IPU RAN, in Canada (Toronto, SynX), the MSTU. AD. Bauman and others. scientific structures. 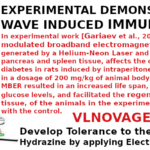 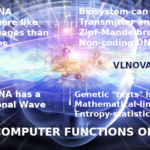