In 1985 recorded unusual oscillation modes of DNA, ribosomes and collagen “in vitro”, through applying a dynamic laser light scattering technique. This has been confirmed by Gariaev’s team, and in addition,they have detected the phenomenon of laser light transformation into radio waves [Gariaev et al., 1997; Prangishvili, Gariaev et al., 2000]. Probably, such transformation is related to quantum nonlocality and may be recorded by a method developed by Gariaev’s team. There is reason to believe that the genetic apparatus of higher biosystems can be quantumly nonlocal. This enables the cells, tissues and body to be in an ultra-coherent state. The above-mentioned results, prove Wave Genes Theory once again, but this time at a higher level [Gariaev, 1994; Gariaev, 1997].

Biosystem can Function as Transmitter and Receiver

The key provision of this theory is that the biosystem chromosomal apparatus can simultaneously function as a transceiver (transmitter and receiver) of gene-linguistic laser, soliton and holographic fields. Moreover, the chromosome continuum of multicellular organisms resembles a statico-dynamic multiplex space-time holographic lattice, containing the compressed time and space of the organism. But even this is far from the full potential of genetic structures.

Biosystem evolution has created genetic “texts” and the genome-biocomputer as a quasi-intelligent “subject”, which is able to “read and understand”those texts at its own level. To substantiate this elementary “intelligence” of the genome, it is extremely important to understand that natural human texts (regardless of what language) and genetic “texts” have similar mathematical-linguistic and entropy-statistical characteristics.

Among other things, this applies to the concept of fractal frequency distribution density of letters in natural and genetic texts (nucleotides represent “letters” for genetic “texts”) [Maslov, Gariaev, 1994]. Below we will describe the results of Gariaev’s research on commonality of such fractals for genetic and natural texts.

More evidence for the linguistic interpretation of genome code function was obtained by the American researchers [Mantegna et al, 1994]. Working with “coding” and “non-coding” DNA eukaryote sequences (within the framework of the old gene ideology), the authors conclusion contradicts existing dogma: linguistic functions are focused only in the protein-coding DNA regions. They carried out statistical analysis of natural and musical texts (Zipf-Mandelbrot law) and applied the Shannon principle of textual information redundancy, calculated as a text entropy.

The results of the analysis show that non-coding DNA regions are more like natural languages than coding regions, and that possibly, non-coding sequences of genetic molecules are the basis for one (or more) biological languages. The authors also developed a statistical search algorithm for coding DNA sequences, which revealed that the protein coding regions have considerably less long-range correlations compared to non-coding zones separating these regions. The distribution of DNA-sequences turned out to be so complex that applied methods could no longer satisfactorily work with lengths over 103 base pairs. Zipf-Mandelbrot distribution for the frequency of “words” with a number of nucleotides from 3 to 8 bp showed more consistency with the natural language of non-coding sequences compared to those of coding.

Again,we would like to emphasize, that the authors see coding as a recording of information about an amino acid sequence only. And this is the paradox, which made them say that non-coding DNA regions are not simply“junk” but are structures created for their specific purpose. Authors also failed to explain the long-range correlations in these structures, although they have discovered growing complexity of non-coding sequences in biosystem evolution. These data are fully consistent with our ideas that non-coding DNA sequences (which represent 95%-99% of the genome) represent strategic information content of chromosomes.

In our opinion, this content has a material-wave nature, it is multidimensional and, as a matter of fact, acts as an associative-mage, and linguistic-wave embryo genesis program this being the meaningful continuation and logical end of any biosystem. Intuitively feeling this, the authors with a nostalgic melancholy bid farewell to the old and well served genetic code model, however, proposing nothing in return. 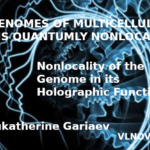 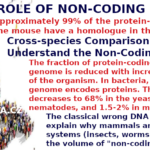 One thought on “WAVE BIOCOMPUTER FUNCTIONS OF DNA”